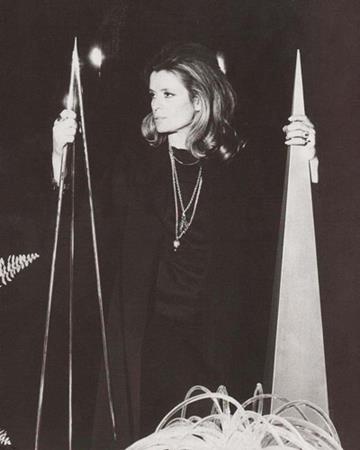 Born in 1922, Gabriella Crespi studies architecture at the Politecnico in Milan, where her work is permeated by her perspective on Le Corbusier’s and Frank Lloyd Wright’s design experience.
Since the 1950s, she has dedicated herself to the creation and worldwide circulation of furniture and other objects that balance design and sculptural abstraction.
Thanks to her always original conception and ideas, to the articulated forms that meet the needs of contemporary design, and to the amazing ability to transform objects by adding openings, closings, and changes in function, Gabriella Crespi has conquered the international scene in a short time. Her creative journey still incisively inspires the expressive creativity of the current generation of artists.

Crespi began her career as a designer in the 1950s with her first production of objects, the “Small Lune Collection”, steel moon-shaped sculptures, in which the stylistic influences of time converge and are transformed.

In the beginning of the 1960s, she established an enthusiastic creative relationship with Maison Dior, especially in the context of home and table accessories and, from the 1970s, with furniture.

In 1968, the prototype of her first “Plurimo” was exhibited in Dallas a representative of  Italian design of the era.

In 1970, Gabriella’s daughter, Elisabetta, began her collaboration in the famous “Plurimi” series, the name of which is a tribute to Emilio Vedova. These “metamorphic” furniture pieces (“Magic Cube,” “2000,”  “Dama,” “Scultura”) are a play on volumes and evolutionary possibilities of the same form that change in space, in perpetual dialogue with both the environment and light.
That same year, “Kaleidoscopes” and “Lune”, the leitmotif of Gabriella Crespi’s poetic philosophy, were born: sculptures and lamps that introduced a creative intervention in design.

Between 1970 and 1974, she created her most significant lost-wax works, including the sculpture “My Soul” (1974), the “Animali” collections, (bronze sculptures with a fairy-like feel that reveal Gabriella’s relentless attention to the natural world), “Jewels,” and “Gocce Oro:” free flowing sculptures conceived through the ancient and precious process of lost-wax casting.

In 1980, Gabriella Crespi designed  three new “Plurimi” (“Blow Up,” “Eclipse,” “Sit & Sip”)  and in 1982 she presented  “Punto ’83,” her last “Plurimo” and a unique piece (one prototype was realized in the same year), at Milan’s Museo della Scienza e della Tecnica as part of the exhibition “I Plurimi di Gabriella Crespi” introduced by Vanni Scheiwiller.

In 1985 she released the last interviews on her work as a designer before setting out on a new life completely devoted to the spiritual quest, a path she follows to this today.

In 1987, she traveled to India where she met Sri Muniraji, who became her spiritual advisor. Gabriella lived in India almost without break for two decades.

In 2005, Crespi returned to Italy and started her book “Ricerca di Infinito, Himalaya” which was published in 2007.

In 2008, she created for Stella McCartney a limited reissue of some of her jewelry collection from the 1970s. The proceeds were donated to the Shree Baba Haidakhan Charitable and Research Hospital at Chilianaula, in the Himalayas, an institution specializing in eye care that was founded by Sri Muniraji, Gabriella’s spiritual advisor.

In 2011 Palazzo Reale dedicated the great anthology “The Sign and the Spirit” to Gabriella Crespi. The anthology was promoted by the Municipality of Milano-Cultura, sponsored by the National Chamber of Italian Fashion and made possible thanks to the exclusive sponsorship of the Mediolanum Farmaceutici S.p.A. Group. It is a tribute to a prominent figure of Italian creativity who has left a permanent mark in the shape of the design culture of our time.

In April 2012 Gabriella Crespi S.r.l was established with the aim of promoting the new creations of the Artist-Designer. In the same year the Archivio Gabriella Crespi was set up within the Company, managed by the Artist’s daughter Elisabetta Crespi.

In 2013 a new limited edition of the “Tavolo Scultura” was presented in a new version made of Belgian Black marble.

In occasion of the Salone del Mobile 2015, Gabriella Crespi presents “New Bronze Age” a series of new limited editions of her ‘classic’ works, realized for the first time in bronze.